It’s helpful to have the background of having been on the bench in three respects: 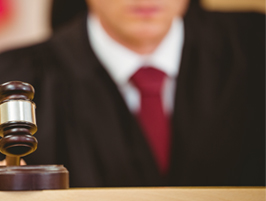 You have some basis for credibility when you state to the parties what you think the likely outcome is going to be in court. Chances are, you’ve heard that argument or something similar, and have seen how juries have reacted. In some cases, you’re listening to arguments you may have made as a lawyer or heard the other side make. You know what the outcome of those arguments was in those situations.

Although history never completely repeats itself, you have some sense of the outcome that these arguments produced. That informs what you’re going to say to the parties.

You’ve learned how to listen. Trying to discern the underlying message is the art of both the mediation and arbitration processes. That’s not altogether different from the art of being a judge.

In arbitration, you’re deciding whether one party wins or loses or whether the victory is split in some fashion. The art in arbitration is to handle the proceeding and craft the decision in a way that makes apparent to the losing party that it had a fair hearing, its arguments were heard and the issues were decided on all the evidence reasonably interpreted.

That’s the art of being a judge in a bench trial, too.