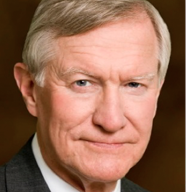 Jim Rhodes is an attorney admitted to practice in the States of New York and Texas. A litigator, arbitrator and mediator with extensive international and domestic experience, as well as experience as a business executive and house counsel, he has served as an arbitrator or mediator in commercial and investment disputes, particularly in the international sector. He specializes in high-conflict, complex disputes.

He is a former partner with Battle Fowler (now Paul Hastings LLP) and Coudert Brothers, where he was engaged in a litigation, arbitration and antitrust practice. While at Battle Fowler, he headed the firm’s Antitrust and International Trade practice groups. As a partner at Coudert Brothers, Jim was also the firm’s hiring partner for three years. Earlier in his career, he was an associate at Simpson Thacher & Bartlett, and a staff attorney with the Antitrust Division.

In addition to his legal career, Jim has a business background. He served as counsel and principal in several investment firms which were involved in the acquisition and disposition of commercial real estate properties and privately-held companies. He is Chairman of S. Gumpert Co. of Canada, Ltd., a privately-held, Canadian food company. From 1989 to 1992, Jim was President and General Counsel of Stanwich Financial Services, Inc., which was involved in the acquisition of portfolio assets from financial institutions.

Over a forty-plus year career Jim has served as advocate, chairman, co-panelist or sole arbitrator in many commercial, investment or securities arbitrations conducted under the rules of various institutions, including the ICC, AAA, FINRA and ICDR.
Mediation Experience:

In addition, during his career his practice has included work as mediator or advocate in mediation of commercial disputes.